An American Tourist in Ireland (2)

On Sunday, my second day in Ireland, my tour group left Dublin shortly after breakfast. We then traveled to Co. Kilkenny see the lost town of Jerpoint Park and the church of St. Nicholas.

This was a fun and unique experience, as a family owns not just the sheep farm and house (originally to be servants quarters), but the lost village itself is located on the property. The family live in what is called Belmore House, a stately home that was originally designed to be the servants’ quarters, according to our guide. But the gentleman building the house ran out of money, so the house remains as it is.

The old road that led us Belmore House actually ran through the original village of Newtown Jerpoint, population 250. There a number of pubs in this village, more than one would think could be sustained by a such a small population.

How many pubs were there in this village? Fourteen. That’s right, folks, there were fourteen pubs to satisfy the thirst of 250 villagers.

Well, actually, not just the villagers – it was designed for the many tourists that came through to visit the Church of St. Nicholas and Jerpoint Abbey. You know, people like me, who like to lollygag and take pictures and write blog posts about their experiences. Although, I am not sure there were such things as travel guides back in the day, when St. Nicholas was re-interred in the churchyard he currently resides in.

And who is this St. Nicholas chap, anyway? And why was this an important stop, you ask? Well, St. Nicholas is St. Nicholas of Myra and he was buried in that churchyard over 800 years ago. Allegedly brought back to Ireland by two crusaders, he has remained in the churchyard ever since. If you look carefully at the grave slab, you can see their faces inscribed on either side of St. Nicholas in the photo to the left.

It wasn’t unusual for the crusaders to bring back the remains of an alleged saint – the Normans were keen collectors of religious artifacts and brought what they found back home. Whether the items in question should have been moved in the first place is up for debate. (1)

As with many other historical figures, we are lucky to have physical descriptions of them recorded in written form. Even luckier are when there are sketches or paintings made, generally from life. Most often, however, we are left with an artist’s rendition of what the written word describes.

And to the right is a very stylized rendition of what St. Nicholas may have looked like, back when he was hale and hearty, very much alive and practicing his faith among his flock and blessing those around him. 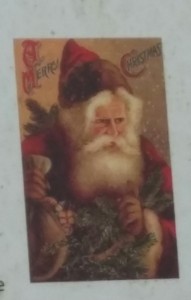 But thanks to the myriad paths of myth and fantasy, we have come to know him as this fellow in the photo on the left.:

So, in essence, I know where Santa Claus is buried.

(1) Given that many museums are now finding themselves in an awkward position of being in possession of artifacts that technically should not have been given to them and are making efforts to either return or make reparations, I wonder if the caretakers of St. Nicholas’ church have ever had that question put to them. I regret not asking.